Don't believe everything you read on the internet, especially when it's not true

The other day I was looking at LinkedIn when I saw a friend of mine had commented on the status of a well-known fitness professional. Here is the status in question: 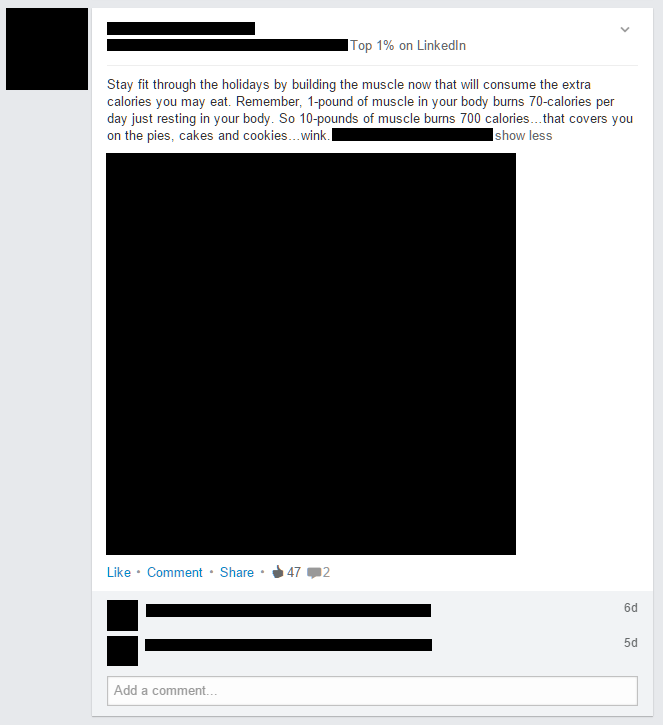 The more observant amongst you will immediately have noticed two things:

And you'd be right, it's nonsense.

Without knowing the specifics, it was immediately obvious that this couldn't be right, so I looked into it a bit further and found the truth (which you will discover below).

And this is what I encourage you to do and that's the whole point of this article. Don't just take things at face value, especially if they seem far-fetched. Of course, that also means that you shouldn't blindly accept what I'm about to tell you, either, although I am at least going to give you some references to scientific papers, so you can check for yourself. Whether or not you trust the scientists is up to you, but it's worth bearing in mind that these are peer-reviewed journals, which basically means that other scientists didn't trust them and actually did check their results. Thus, not only is it okay to believe them, it's the right course of action. But you could still click on the links to see whether or not I'm making it up.

This article marks somewhat of a departure from my usual theme. It's not a permanent departure, though; I'll still be writing about information security, it's just that today I'm writing about something else that interests me. I'm merely following Bertrand Russell's advice, which I repeat below.

The secret of happiness is this: let your interests be as wide as possible, and let your reactions to the things and persons that interest you be as far as possible friendly rather than hostile.

My friendly reaction (as advocated above) is to obscure the identity of the pedlar of this misinformation. Friendlier still would be not to mention it at all, but hey, nobody's perfect.

In real life, I know lots of people from various backgrounds. Two of the areas that have interested me for as long as I can remember and from where a large number of my friends are drawn are strength sports and IT.

If you know me solely through my work and certainly if you have only met me in the last five years or so, then my background in powerlifting and bodybuilding might come as something of a surprise.

I competed in various powerlifting competitions between 1997 and 2009 and I even did a natural bodybuilding show in 2000. Here are a couple of old photographs of me competing at each of those things. 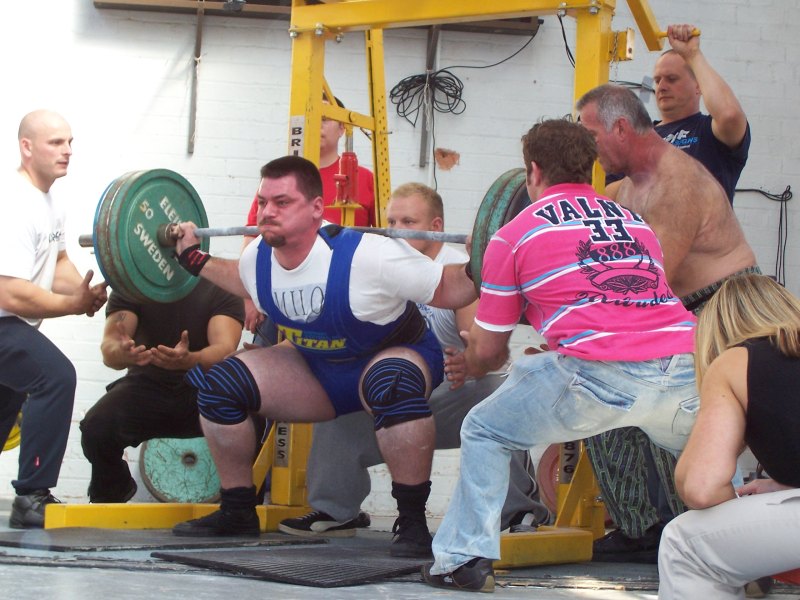 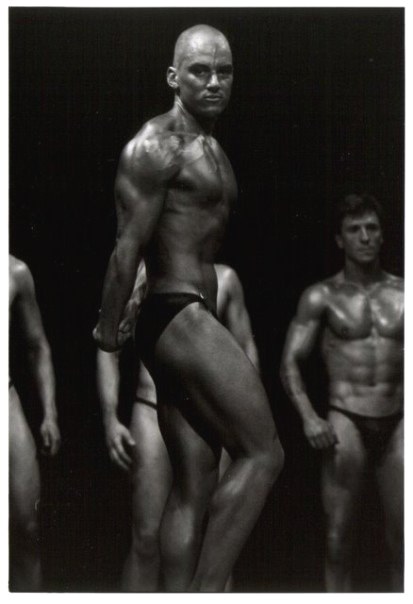 And if you only know me through strength sports then, well, my nerdiness has probably not escaped you.

Right, back to the matter at hand.

When I read the status, I had no idea of the answer to this question. However, I knew it wasn't 70 kcal per pound per day. 1 lb is small and 70 kcal is quite big, especially when you consider the NHS recommended reference intake of 2000 kcal per day for an adult, which is based on an average-sized woman doing an average amount of physical activity. It seems as though 30 lb of muscle more than accounts for the recommended reference intake (70 kcal/lb x 30 lb = 2100 kcal). Surely most adults have more than 30 lb of muscle, don't they?

There's also a certain amount of ambiguity around the term at rest. It's generally agreed that it refers to the Basal Metabolic Rate (BMR), which essentially means the minimum energy expenditure required to keep you alive. The point of this is that caloric requirements at rest are much lower than caloric requirements when you are doing anything, even reading this article (unless it's already sent you to sleep and you're lying down in a room which is at exactly the correct temperature and you aren't currently digesting any food and... you get the idea).

How much muscle does a person have?

For women, the figures are slightly lower with Janssen et al reporting 30.6% and Marieb and Hoehn giving a figure of 36% of total body mass.

Taking the lowest of these percentages (30.6%), it's apparent that a 100 lb woman (quite small) would, therefore, have around 30-31 lb of muscle which would consume more than the 2000 kcal recommended. And remember, the brain and other organs also require (a lot of) energy to function.

This would mean that his muscle alone accounted for 7000 calories of energy consumption per day, even if he was resting. This is not feasible.

When I was powerlifting I used to compete at a bodyweight of 125 kg (275 lb) and I am fairly sure I had more than 100 lb of skeletal muscle. I did not need to consume more than 7000 kcal each day, however.

How much energy do the various parts of your body need?

Here is some of the information from one of the tables in the 2001 paper from McClave and Snider[4].

It's interesting to note that, in the normal human from the study, the brain and the skeletal muscle each have approximately the same energy requirement, expressed as a percentage of the overall resting energy expenditure, accounting for almost half of the daily requirement between them.

Not everything you read on the internet is true. However, this next bit probably is:

The average number of calories consumed by human skeletal muscle at rest is 5.9 kcal per pound per day (McClave and Snider, 2001[4:1])

Thus, we were right not to believe the LinkedIn status. 10 lb of muscle burns approximately 59 kcal per day (at rest) which is roughly equivalent to a single Oreo cookie, or one and a third Jaffa Cakes (powerlifters love Jaffa Cakes) and not "pies, cakes and cookies".

What do you think? Please let me know by commenting below, but please also bear in mind Bertrand Russell's advice about friendliness being better than hostility. 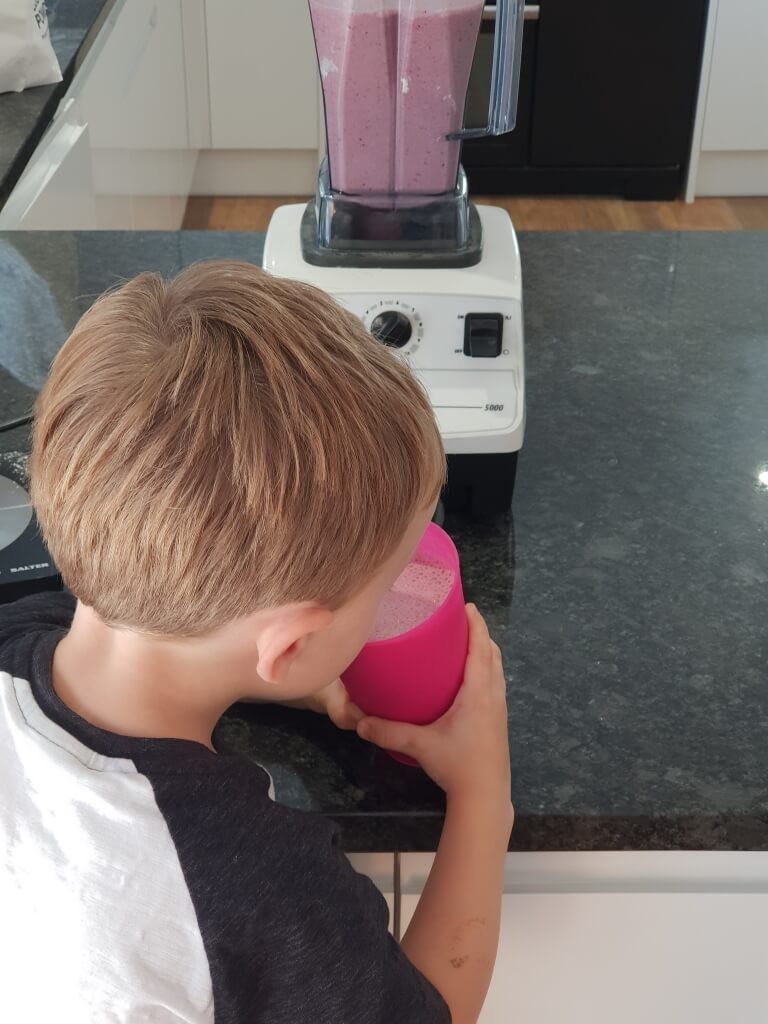