If you're anything like me, you probably struggle to find the time to do all of the things you want to do. You may also find it irksome when people offer trite suggestions like getting up an hour earlier. I'm not going to do that. As you may know, I'm married, I've got three young children and I work more than forty hours a week. This means that I can't just watch a few hours less television each night or get up earlier and get loads done whilst everyone else is still asleep, as anyone who has tiny kids will understand[1]. I'm not saying my life is tough, but I now appreciate this Monty Python sketch in a different way.

Right. I had to get up in the morning at ten o'clock at night, half an hour before I went to bed...

Even when I hear that bit, I think to myself: "Luxury!"

Anyway, the point is that I don't have a vast amount of free time and I haven't always been the most organised of people so, if I've found a way seemingly to conjure extra time from thin air, then whatever it is I'm doing might also work for you. This means I might as well write it down and then you can make up your own mind or, better still, offer me some suggestions as to how I can make even more time.

To paraphrase[2] Jesse Ventura in Predator (and not the Tyrannosaurus bit): 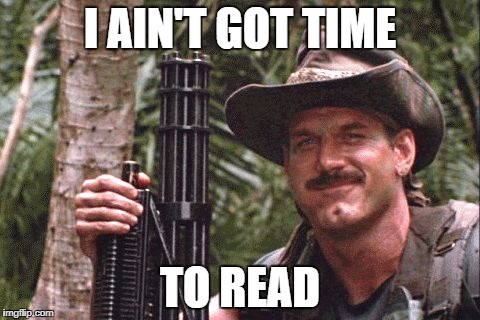 For some reason, I've always been quite a slow reader. I think it's because I find myself thinking about what I'm reading and then my mind goes off on tangents and then I suddenly realise I don't know what's going on and I have to reread an entire page or so. So, to me at least, reading a book is a time-consuming process that requires the complete attention of my eyes and my brain and therefore doesn't lend itself very well to being paired with other tasks. Or at least it usedn't to.

The executive summary is that I've been listening to audiobooks, usually at twice real-time speed, so I haven't actually been reading. But they're unabridged audiobooks, so I don't feel like a liar when I claim to have read them. Somebody read them (out loud) in their entirety and I heard them.

Furthermore, when I mentioned this non-reading to my friend Phil E (is it only me who thinks it would be funny if he had a zeroth name like Biblio or Audio?), he pointed me to this article which claims that my brain doesn't know (or care about) the difference between listening and reading anyway, so that's even better.

I signed up to Audible ages ago and then didn't do anything about it, including not downloading any books. Then I remembered I had the account and started listening. For £6 a month you get one audiobook, regardless of its ostensible retail price and, if you run low on credits, you seem to be able to buy another three for £18 (so still £6 each). In other words, all books are <= £6 at present. That means Sherlock Holmes was only £6. All 71 hours and 58 minutes of it. What a bargain.

UPDATE: When I mentioned this to my colleagues, one of them suggested that it was worth considering LibriVox for free, public domain audiobooks. The books are read by volunteers (with varying quality, as you might expect), there are mobile phone apps (from which you can obtain the audiobooks), you can alter the playback speed and it's free. There is also an advertisement-free version which is very cheap (e.g. £1.99 for the iPhone version in the UK app store). This all means that it's definitely worth checking it out. If you were frugal you might try LibriVox first and then resort to paying only for those books which were not available for free.

Here are some of the times I've been listening:

If I ever did any ironing, I'd probably listen then, too. And, if I had a dog, it's possible I might listen whilst walking it, although I'd possibly be too busy simpering over it.

Which n books have I "read" in fewer than n weeks?

Here is a list of some recent ones. Expect zero or more notes to be written about each of them at https://tomssl.com/books soon. ==UPDATE: I have started adding notes at (and have added more books to) GHOST_URL/books/. ==

NOTE: None of these are affiliate links, so I don't stand to gain anything if you click on them. If that changes, I'll let you know.

I make that eleven and a bit books in 69 days (dude). Or twelve and a bit if you count A Study in Scarlet. Which is more than one each week.

I've always loved reading and, due to my allowing other things to get in the way, I haven't been doing enough of it for my liking for quite a long time. Recently I have (re)discovered audiobooks and have been listening to them during what might otherwise be classed as dead time. I've got a real kick out of it and have learnt quite a lot. Perhaps you can do the same. Let me know.

There's a frequently-updated list of the books I've been reading at https://tomssl.com/books.